Time of the Year 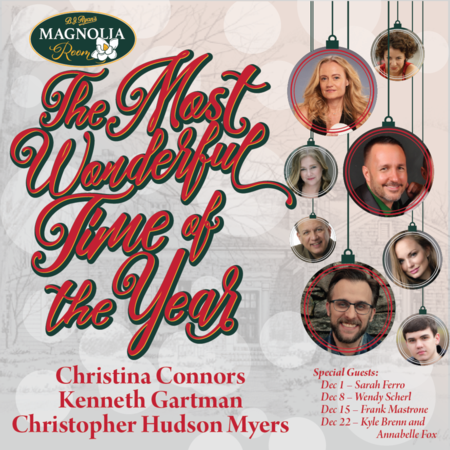 Celebrate the holidays with cabaret and Broadway performers Christina Connors, Kenneth Gartman and Christopher Hudson Myers as they gather around the piano and share what makes this the most wonderful time of the year with Special Guests Sarah Ferro, Wendy Scherl, Frank Mastrone, and Kyle Brenn.  This Magnolia Room holiday cabaret special is certain to remind you of the joys of the season!

BJRyansMagnoliaRoom.com for info and tix.

Kenneth Gartman performed in the National Tour of THE MUSIC MAN. He has also performed internationally on a Live BBC Broadcast of Simply Sondheim and throughout Ireland in A New York Songbook: Way Off Broadway. Kenneth has appeared as both a singer and a pianist in the country's finest concert halls. Gartman's work in cabaret garnered nominations for Best Music Director and Best Male Debut in the 2012 Broadway World New York Cabaret Awards and a nomination for Best Vocal Duo in the 2016 Manhattan Association of Cabarets and Clubs Awards. As a Musical Director, he has worked on numerous musicals, cast recordings, demos, cabaret workshops, cabaret shows, benefits, awards presentations & concerts.  KennethGartman.com

Christopher Hudson Myers has been teaching, directing and choreographing in Fairfield County for about 3 years after closing the Broadway hit Mamma Mia! as a Swing/Dance Captain in 2015. Some of his favorite roles as a performer include Marius in Les Miserables, Robbie Hart in The Wedding Singer, Abraham in Altar Boyz and Riff in West Side Story. Currently, he is the Company Manager for The Summer Theatre of New Canaan, co-choreographer for Staples High School in Westport (with his beautiful wife, Rachel) and also teaches at the Performing Arts Conservatory of New Canaan. He is so thrilled to be a part of the Magnolia Room as a performer and a host! When not performing or teaching, Christopher loves dancing around the living room with his gorgeous, now 2-year-old daughter, Coralie Alice.

Christina Connors has performed all over Europe and South America as a headlinger with Costa Cruise Lines.  She has appeared in musicals in regional theaters, most recently in Hairspray at the Wall Street Theatre here in Norwalk, CT.  Christina has shared the stage with Broadway’s biggest stars to raise money for local charities and has performed, produced and co-hosted numerous benefit concerts.  Currently, you can find Christina performing the songs from her album “Dream Bigger” at local theaters and Cabaret Rooms. ChristinaConnors.com