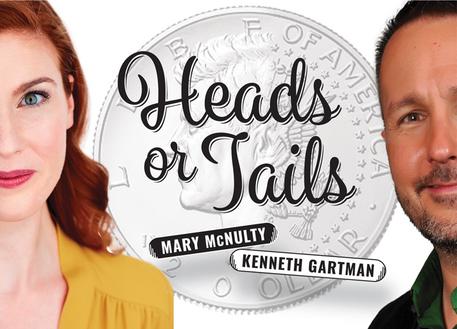 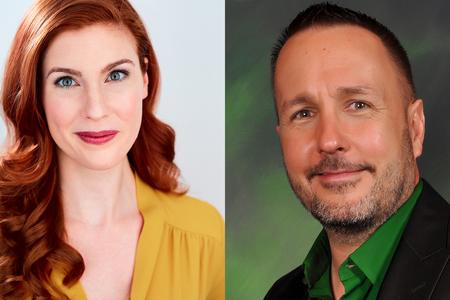 "The immensely talented Kenneth Gartman...has the vocal power of a Broadway star with the nuance of a cabaret singer who knows how to connect with an audience in a smaller venue."
BroadwayWorld.com (2016)

"She [Mary McNulty] has one of the most beautiful voices heard on PPAC stage in recent memory, made even more impressive by how effortless it seems ... McNulty seems to need only open her mouth and glorious music comes from her soul."
BroadwayWorld.com

Heads it's Kenneth.  Tails it's Mary.  How the show turns out is up to you!  Join us for a game of musical theatre chance as we let Lady Luck choose the songs with the toss of a coin!  Mary McNulty & Kenneth Gartman are together again for the first time making their Cabaret Duo Debut in this fast paced romp exploring ups & downs, ins & outs and bits & bobs.  Includes (possibly) songs by Gershwin, Porter, Lehrer, Bernstein, Yeston, Sondheim, Larson, Friedman, Goldrich & Heisler, Pink and Lizzo...but I wouldn't bet on it!   *No two shows are the same!

Mary McNulty grew up in St. Louis, MO, earned a BFA in Theater and Voice from University of Kansas School of Music and now calls New York home. Mary is a classically trained soprano with a mix-belt and a proud member of AEA. She has been described as "charismatic," "illuminating," "vivacious," "vulnerable," "intense," with "excellent comedic instincts" and a voice that is "lyrical," "expressive," and "effortless".  Mary recently played June in Into the Breeches with Shakespeare Festival St. Louis. This past summer she portrayed Lilli/Katherine in Kiss Me Kate at Summer Theatre New Canaan. Other recent credits include Snow Queen in the new musical The Snow Queen, Judy Denmark in Ruthless! the musical, and Portia in The Merchant of Venice.

Kenneth Gartman performed in the National Tour of THE MUSIC MAN.  He has also performed internationally on a Live BBC Broadcast of Simply Sondheim and throughout Ireland in A New York Songbook: Way Off Broadway.  Kenneth has appeared as both a singer and a pianist in the country's finest concert halls.  Gartman’s work in cabaret garnered nominations for Best Duo/Group MAC 2019, Best Host MAC 2019 and Best Music Director MAC 2019 as well as Best Music Director and Best Male Debut in the 2012 Broadway World New York Cabaret Awards.We are made up of the people we've met and the places we've been.  Join Kenneth on a musical journey to some of his favorite places as he shares his passion for culture, language and people.